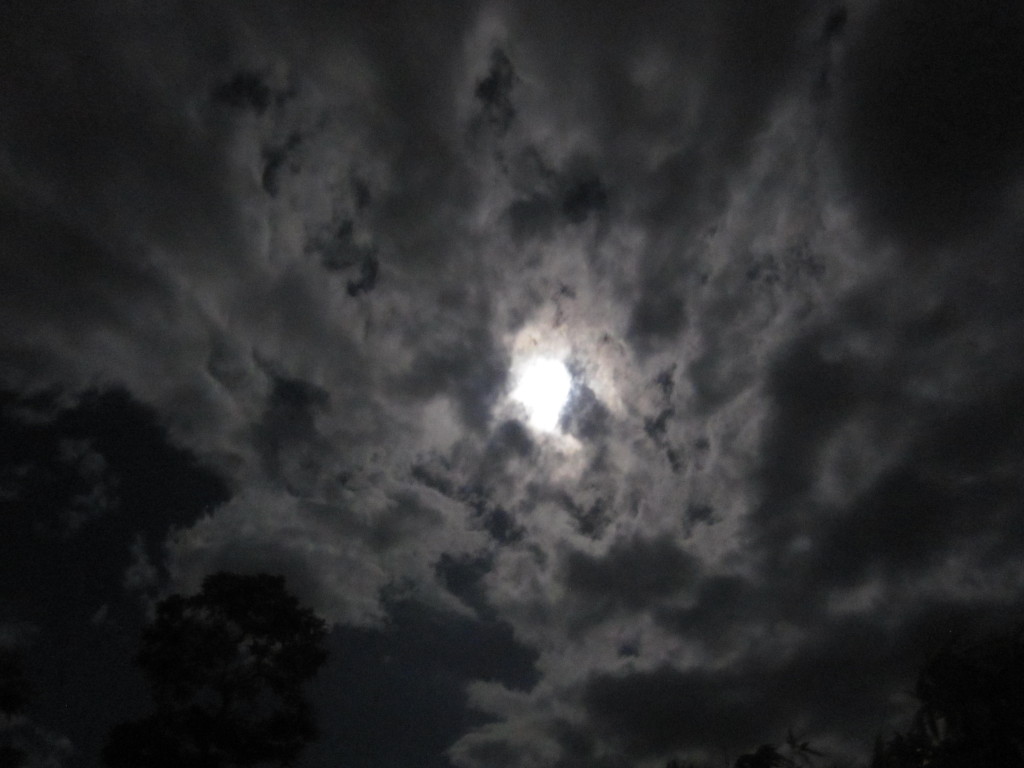 I’ve been pestered for photos of the special Ubud party I tailed my brother to last Saturday night. Turns out the only publishable one I have is of the new moon, visible through the clouds hanging over the trees on our mysterious route there (complete with secret hand-drawn map).

This moon was the only light to reach into the absolute darkness of the jungle on what turned out to be just a short ride from my tiny new home in the heart of town. After much giggling and carry on, including several false starts, false arrivals, and me learning the bahasa Indonesia for ‘I’ve got a little problem in the back’ (my front-seated brother to the driver, often and unfairly) we finally hit the mark and turned with purpose onto a single lane cut straight across an inland ocean of floating rice crops.

Tiny fireflies turned into fields of ‘lampu’; little covered candles that numbered into the high hundreds. Our new Swiss friend Alejandro later described the end of his ride on his scooter through the same darkness to come upon the phalanx of gracious, uniformed attendants greeting us at the front of the huge main house as ‘beautiful…’ in an accent that serves the meaning much better than if you imagine mine.

Inside, one of the guest DJs played a particularly inspired swinghouse set and smiling staff refilled drinks in a whirl of iridescent limes and sparkling ice cubes. The pool glowed in the exact same shade of  blue as the Bombay Sapphire bottles clinking around it, but much more than high-quality liquor and fancy water features, the luxury of sheer space cannot be overstated. All around us the still, high water in the paddy fields reflected the new moon like endless tiny mirrors on an Indian cushion, and we were all we could see of the world until the darkest edges of the jungle. A glowing heart of music and pinwheeling limbs on a tiled platform high above radiating terraces, it seemed quite possible that we were all there was, and this was the only party on the planet. Yes, it was smugalicious.

And so it went on until one by one the littlest flowers begin to wilt, falling gently into tiny sparkling heaps of stardust and sequins on the cabana chairs and pool lounges dotting the large estate. Not one Cinderalla misplaced her Loubs, but Very Expensive bags overloaded with smart gadgetry and scented like duty-free counters lay abandoned all over the place, and I spend a good twenty minutes reuniting the soft, fleshy petals of quilted Chanel with the correct Sleeping Beauty after deciding I was clearly the Fairy Godmother of the piece.

Somewhere in all the excitable kissing and meeting and greeting and sloshing of drinks a (probably very limited edition, elite, single origin) flu virus was also passed around. So this Saturday night I’ll be enjoying my cocktail of antibiotics, distilled water, paracetamol and pseudoephedrine alone in my room, but if I turn the music up and close my eyes, I can still picture the new moon and the lampu, and that’s enough*. For now.

Note: by ‘enough’ I mean please-send-six-boxes-of-Nurophen-Plus-and-the-next-four-seasons-of-Friday-Night-Lights-terimah-kasih.